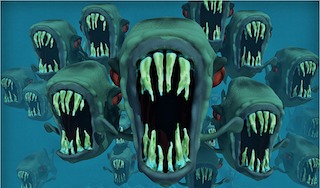 Once upon a time

Once upon a time there was a man who was always worried that he was sick with something, and he was even more concerned that he might be dying. One day, with all these fears floating around in his head, he began to think that it was very likely that he was already dead. So, he asked his wife.

She laughed and told him to touch his hands and feet.

– See? They’re warm!  Good then, that’s how you know you’re alive. If you were dead, they’d be very cold.

Her answer made sense to him and eased his mind.

A few weeks later, on a snowy day, the man went out to chop some wood for the fire. When he got to the forest, he took off his gloves and started chopping.

Without thinking about it, he touched his cheek and noticed how cold his hand was. Remembering what his wife had told him, he quickly took off his shoes and socks and, to his own horror, confirmed that his feet were very cold too.

There was no more room for doubt in the man’s mind, he was absolutely sure that he was dead.

– It wouldn’t be right for a dead person to be walking around chopping wood  -he said to himself. So, right then, he dropped his axe next to his mule, he lay down in the snow with his arms crossed over his chest, and he closed his eyes.

Soon, a pack of dogs approached and discovered his saddlebag, which contained some provisions. When they realized that no one was protecting the bag, they rent it open and devoured the food. The man thought:  “They’re lucky I’m dead, or they’d really get a beating.”

The pack kept sniffing around and discovered the man’s mule tied to a tree. It was an easy target for the sharp-teethed dogs. The mule squealed and kicked, and the man thought to himself that he would’ve liked to save the mule, if only he weren’t dead.

After only a few minutes they devoured the mule, the pack set off in search of more.

It wasn’t long before one of the dogs caught scent of the man. The dog found him lying motionless in the snow. It approached slowly, very slowly, because to the dog, men were treacherous and cunning creatures.

Within moments the entire pack had surrounded him, their teeth shown, saliva dripping from their jaws.

“Now they’re going to eat me – thought the man – if I weren’t dead, it would be a different story.”