Limiting Beliefs: How do you get rid of them? 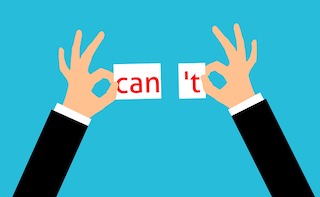 We live thinking “we can’t”, making mountains of things simply because once, a long time ago, when we were small, we tried to do something and couldn’t.

Read this story and see how it happens.

Once upon a time there was an elephant in a circus. During the performance, this enormous beast would nobly display its tremendous weight, size, and strength… But after its performance, and until just before it went out on stage, the elephant was always tied down with a chain to a little stake in the ground that held one of its feet.

The stake however was just a minuscule piece of wood, hardly a couple of centimeters long. And although it was a strong thick chain, it seemed obvious that an animal capable of tearing a tree from its roots, could easily free itself from that stake and flee. What held it there? Why didn’t it escape?

The power of limiting beliefs

The elephant didn’t escape because it had been attached to a stake since it was very, very small.

The little elephant pushed and pulled and tired himself out trying to get free. But, regardless of his efforts, he couldn’t do it, because the stake was too strong for him.

That enormous powerful elephant that you see in the circus does not escape because, poor thing, he thinks he can’t.

He has that memory etched into his mind: the futility that he felt shortly after he was born.

And the worst part is that he has never returned to seriously question that memory.

Never again did he return to test his own strength…

We grow up carrying this message that we impose on ourselves, because of which we never return to try to free ourselves from the stake.

Book a free call with me or sign up to my newsletter to get inspirational stories, coaching tips and useful exercises.