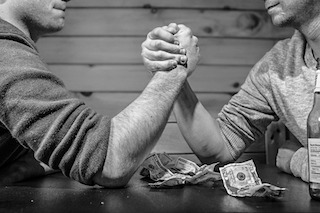 How do we prevent self sabotage? Whatever reality you believe in becomes true.

Once upon a time two frogs fell into a bowl of cream.

They immediately realized that they were sinking: it was impossible to float or even swim through this thick quicksand-like substance. At first, the frogs tried to get to the edge of the bowl by kicking, but it was useless. They only splashed about and buried themselves. Every time they came up to breath, it seemed more and more difficult to reach the surface.

That said, it stopped kicking. It started sinking and was literally swallowed up by the thick white liquid.

The other frog, more persistent, or maybe more stubborn, said to itself “There’s no way out! I can’t get through this stuff. Death is closing in on me, but I’ll fight ’til the end. I won’t die one second before my time.”

The frog kicked and splashed for hours without moving an inch. Suddenly, from all this kicking and moving and splashing, the cream turned into butter.

The frog kicked again and, with some amazement, realized it was in mid-air. It landed in the butter with a squish; it kept kicking and jumping until finally it reached the bowl’s edge.

The frog jumped down off the edge and croaked happily all the way home.

If you are going through a difficult period in your life, book a free introductory session here and let’s see if I can help you.

Check this video of Sadhguru on self sabotage.

One simple and effective way to reach your goals

Limiting Beliefs: How do you get rid of them?

Why you should step outside your comfort zone