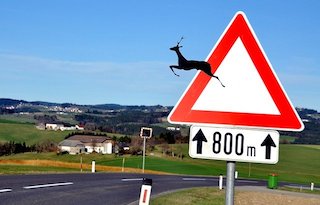 Is it ok to take risks in life? If you want something go for it! Take a risk. Don’t always play it safe or you will die wondering.

When he got older, his father said to him:
-My son: not everyone is born with wings. No one is forcing you to fly, but I think it would be a shame for you to limit yourself to walking when God gave you wings.
-But I don’t know how to fly – replied the son.
-True… – said the father. And so he led his son on foot up a mountain to the edge of an abyss.

-Do you see, my son? It’s empty. When you want to fly, come here, take a deep breath and jump.
The son had doubts.
-What if I fall?
-Although you will fall, you won’t die. When your cuts and bruises heal you will be stronger for the next attempt.- the father answered.

People will try to discourage you

The son went back to town to see his friends, whom he had walked with all his life.
The most close-minded ones said to him: Are you crazy? Why? Your father has gone half-mad… Why do you need to fly? What’s it good for? Forget it…
His best friend tried to reason with him: Even if your father is right, it’s too dangerous! Wouldn’t it be better to start more slowly? …from the top of the stairs or from up on a tree, but… from a cliff?

This advice made sense to him, so he climbed a tree and summoning all of his courage, he jumped. He spread his wings, and beat them with all his might but fell awkwardly to the ground.
Walking along with a big bump on his forehead he saw his father.

-You lied to me!- he said- I can’t fly. I tried and look what happened. Look at this bruise! I’m not like you. My wings are just for decoration.

-My son – said the father – In order to fly you have to create space in the open air so that your wings can really spread out. It’s like a parachute. They only work from a high altitude.

To fly you have to begin taking risks.