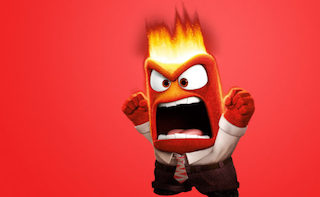 Anger is a form of being nasty, both for you and everyone around you.

When you get angry, you could do the most stupid things of your life.

AND … most of the time YOU SUFFER MORE THAN YOUR VICTIM.

Anger – Once there was a man

There once was a man who traveled the world with a brick in his hand. He had decided that every time someone infuriated him, he would hit them with the brick.

He came across a loudmouth who started saying all kinds of bad things to him. So he followed his plan and threw the brick at him.
Afterwards, he found that going to pick it up was a real inconvenience. So, he decided to tie a 3 foot rope to the brick. That way the brick would never get too far away. He soon discovered that the new system had its own flaws. To begin with, his target had to be less than 3 feet away. But also, the string would get tangled up and caught on things.
Instead of a rope the brick had springs. Now, he supposed, he could throw the brick over and over and it would come back on its own.
So he set out, and as soon as someone mistreated him, he threw the brick. He missed the target. The brick bounced back and hit him right in his head.
He tried again, but he misjudged the distance, and the brick came back and clobbered him a second time.
The third time, after deciding to clobber his victim, he tried to protect her from his aggression, and in this attempt the brick once again hit him in the head.
All of this was making a huge bump…
He never understood why the brick wouldn’t hit anybody else but him.
I hope you enjoyed reading this blog. Here you can find my other blog articles with important coaching tips to enhance your happiness and balance in life.